Dinosaur parties have been popular choices for children ever since the first Jurassic Park film was released in 1993 – although the tyrannosaurs and velociraptors seemed hellbent on eating the humans, that hasn’t deterred the 3+ demographic from wanting to share their birthdays with them. The release of Jurassic World and Pixar’s The Good Dinosaur in 2015 ensured that this isn’t a trend which is going to fade away any time soon.

It’s important to get the tone of the party right, though. You can go for a realistic Jurassic Park theme or a softer, cartoonish The Good Dinosaur theme. At Partyrama, we have everything you need to achieve either of those themes, from the invitations you send out to the party bags you send guests home with. You don’t have to theme everything identically – it depends if you’re bothered about consistency. The guests (depending on their age) probably won’t mind. 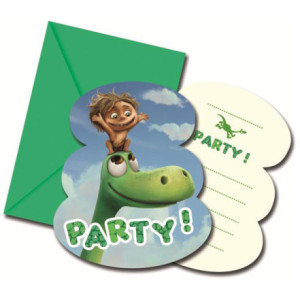 Although they’re exciting in the sense that they’re inviting you to something, invitations themselves aren’t particularly thrilling. You can alleviate that by investing in dino-themed designs that simply require you to fill in the blanks (who, what, when, where, etc.), and you can also give them the extra “wow” factor by pouring a small amount of dinosaur-shaped confetti into the envelope. 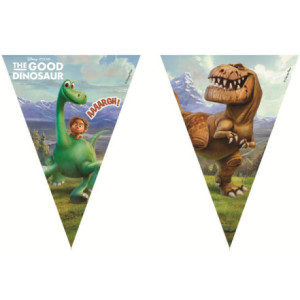 Some people go all out with their party decorations – to the point that the living room might actually look like Jurassic Park – while some prefer to go a bit more minimalist when it comes to a party. If the weather’s fine and your garden can handle it, you can get much more of a dinosaur feel by holding the party outside.

As far as the decorations go, you can get almost anything with a dinosaur printed on it. Triceratops balloon? Easy. The Good Dinosaur-themed paper plates? Done. Why not sprinkle the food table with any confetti that might be left over from the invitations? Just make sure children know they’re not for eating!

One of the major additions you can make to your dino decorations is the inclusion of a six-foot-tall T-Rex cutout which is sure to make guests (and the cat!) think twice before standing next to it. It’s very realistic, though, so small children may have to be reassured that they don’t have to stand still so it can’t see them! 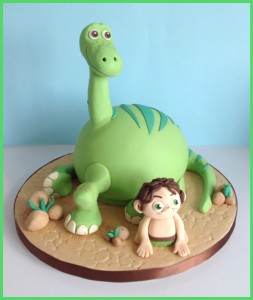 The cake is the centrepiece of any party’s food table, so it needs to be carefully thought-out. You could go for a flat cake with a photo or other design printed onto it, in which case a dinosaur cake topper might be a nice addition to make it a bit more dazzling.

Alternatively, you could make your own 3D cake version of Arlo from The Good Dinosaur. Our guide breaks everything down for you and shows how easy it is to create your own baking masterworks. Somewhere between Mary Berry and Disney artistry, care and time is needed to do justice to this sort of cake, but the rewards can be huge. 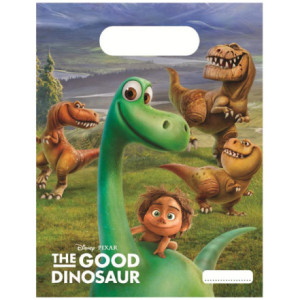 Party bags live and die by their contents – this, in fact, might be the most important thing for a parent to get right. You need to gauge the interests of the guests (which is no mean feat in the age of the iPhone) and cover a range of different interests while ensuring that every bag has the same contents and you don’t spend a fortune on them.

One inclusion you can make which ties into the dinosaur theme is a small dinosaur toy which is relatively inexpensive and should be the sort of thing you can build the rest of the bag around. You could also include dinosaur tattoos or dinosaur bubble bottles – anything goes with a party bag.