You may have thrown all of your efforts into decorations, hall hire, invites, food preparation, party themes and so on, but have you stopped to think about the kids’ party games you will need to keep your little ones and their friends entertained at the birthday party?

You may be thinking that pass the parcel will be enough but if you have a range of ages, a large number of children attending and a few hours to keep them occupied during, you are most definitely going to need to pull a few tricks out of your sleeve to keep the party buzzing!

With this in mind, we have brought together 11 of the best kids’ party games around:

Ok, as I mentioned it, I’m going to start with it. Pass the parcel is a firm favourite. However, these days you need to keep everybody happy so you will need to adapt the way you may have played it as a child and there is one sure fire way of doing this– sweets! Between each wrapper, you need to hide a small packet of sweets so that each child gets a ‘prize’ of some sort and not just the big winner at the end. I would recommend having one person on the music and another to take note of which child has opened the parcel to guide the DJ with a wink or a nod as to who needs to get the parcel next.

This one is a classic, isn’t it? Play the music, the children dance, when it stops they have to stand as still as a statue. Any movements and the child is out! Of course, you’ll need to adapt it for the younger ages and you may have to cut the game shorter for them as their attention spans aren’t quite so long but for ages 6+ this is usually a winner!

As above but when the music stops those bums must be on a seat. This was always the nerve wrecking game as a child wasn’t it? Will I get a chair? Will someone beat me to it? Will we both end up flat on the floor as the chair gives way?! Oh, the fun!

This party game works by having all of the children sitting in a circle. One child is chosen to walk around the outside of the circle and gently tapping on the others heads saying the word duck. When they choose to say goose it becomes a game of tag between the two around the circle. If the ‘goose’ catches them they have to perform the tapping again but if they get away then ‘goose’ becomes the duck, duck, goose participant. You can add your own twist to this kids’ party game by using your child’s favourite characters instead, for example, Peppa and George or Iron Man and Spider-Man, Elsa and Anna or Sven and Olaf… you get the gist!

Pin the Tail on the Donkey

Always a fun game no matter the age. You will need a board with a donkey (or any animal you like) and a tail that will need to be ‘pinned’ onto it by a blindfolded child. Probably best that you use blu-tac for this one and be sure to guide them carefully if they are of a younger age. The winner is the person who gets the tail in the right place or closest to it.

This is a great game to end with to get those kiddies chilled before sending them home! The aim of the game is for those lions to stay as still as possible as an adult walks around trying to ‘wake’ them by talking, making jokes, tickling or creeping around them. The last lion left sleeping is the winner.

A popular US game that has become a great kids’ party game over here in the UK too. The pinata is usually made out of papier mache and is filled with sweets which the child has to knock out of the pinata by breaking it with a baton. To make it fun and much more interesting the child is blindfolded.

This is another game that could be used towards the end of the party as it will take some calm and concentration to carry out. You will need eggs (hardboiled will mean less mess for you!) and some spoons– easy! You could get creative with the eggs prior to the birthday party and decorate them with colourful paint and/or glitter. If you want the younger ones to do well, secretly attach theirs with a dab of blu-tac!!

If you have a theme for your family birthday party then a treasure hunt that is linked to this is a fun idea that everybody can join in with. If your venue has outside space and it’s a nice day why not set it all up out there? Or if you wanted to make it a bit more difficult or last that bit longer then you could incorporate your inside area as well as outside. You have 2 ways that you could work this. For younger children, you could use images of the items they need to look for or a basic map to show where they need to go. You could set up arrows to point them in the right direction and use crosses as ‘x’ marks the spot or stars so they can easily see where the ‘treasure’ is located. For older children, you could leave clues, such as little messages, which will ask them to do something, collect something, perform something and so on. For example, You’ve reached the bridge where the troll lives, if you disturb him he will come out and chase you, step extra quietly around his home and be completely silent. If you were really committed to this, an adult could play the role of the troll and wake up if the children are too noisy!! Think of all the characters you could incorporate and who you could enrol to get in on the act! This could be a huge focus for your party and be a huge hit with all the kids.

What’s a kids birthday party without balloons, eh?! This is a quick and simple time filler game if the children need a bit more entertainment. Have the children line up behind one another and place a balloon under the chin of the first in line. They have to turn around and try to pass the balloon on to the next child without anybody using their hands. You can also do this by placing the balloon between their knees but that can be a little more tricky.

Select either a child or one of the adults to play the role of the wolf. They need to stand with their backs to the other children who will be lined up against a wall. They call out ‘What’s the time Mr Wolf?!’ to which the wolf replies with a time that they choose. If the wolf says 2 O’ Clock then the children all take 2 steps forward. The wolf will try to catch them out by turning quickly around and look for movements. If he sees anybody flinch they need to go back to the beginning. To win the game the children must never be seen and tap the wolf on the back before he catches them!! 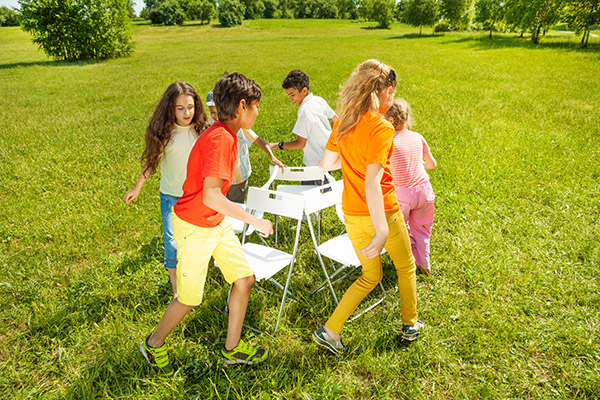 Do you have any other favourite kids’ party games that you love? Let us know!

If you enjoyed this article, please let us know on our Instagram, Facebook and Twitter using the hashtag #partyramauk. Don’t forget to visit Partyrama for all of your Halloween party supplies, decorations, outfits, balloons and lots more!

How To Plan A Perfect Christmas Party In A Flash