How To Make A Frozen Olaf Birthday Cake

Any parent with small children will be familiar with the film Frozen and its myriad of delightful characters (as well as the annoyingly catchy song “Let It Go”). Since its release in 2013 it has captured the imaginations of boys and girls around the world, leading to a wealth of Frozen merchandise, Frozen-themed birthday parties and, naturally, Frozen cakes.

This Frozen cake with Olaf’s head toppling off his body feeds around 30 people and would make a cracking centrepiece at any child’s birthday party themed with our Frozen party accessories. It’s actually easier than it looks – it’s often harder to model the finer details on tiny figurines than it is to carve a whole character out of cake. If you follow this guide then you’ll have no trouble wowing your party guests! 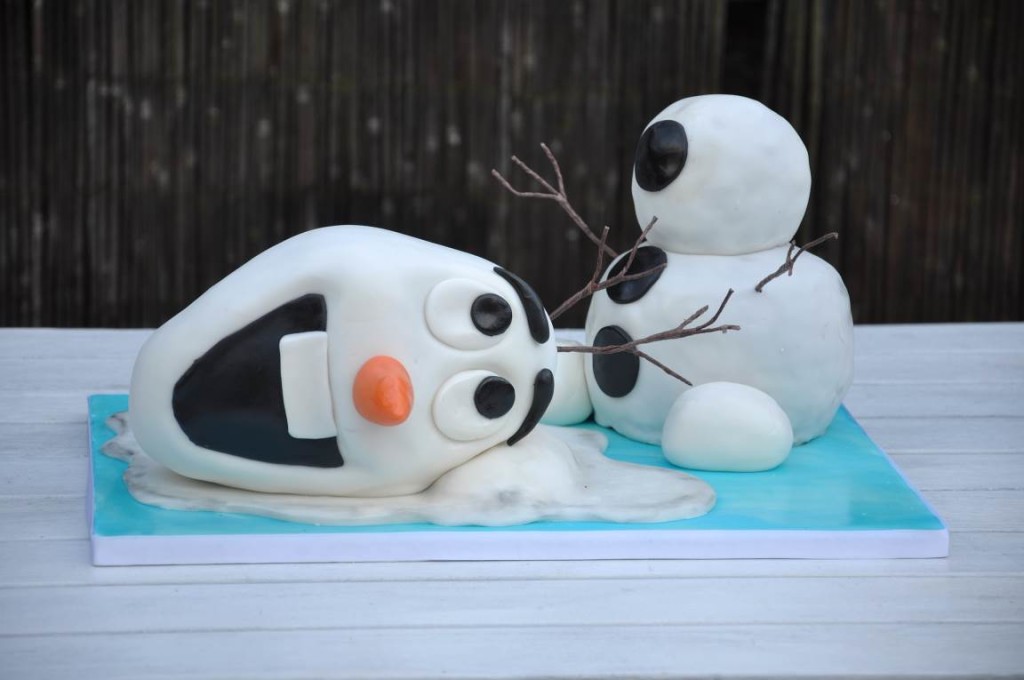 The first thing you need to do is make the cake itself! I chose a chocolate cake recipe here, because who doesn’t like chocolate cake?! It’s also a little firmer than plain sponge, which makes it easier to carve if you are new to it. You will need to mix around two quantities of cake for all the tins required.

I generally always make more cake than I actually need but it’s better to have plenty of cake to work with – in any case, the leftovers generally get eaten as we work in the kitchen.

This dark chocolate ganache buttercream is definitely one of my all-time favourites. Don’t be deterred by the use of dark chocolate in a kids’ cake – there’s still plenty of sweetness from the icing sugar.

Once the cakes are totally cool and the buttercream is made you can layer them up ready for carving. You might need to level them a little if they have domed up a lot – you can do this with a serrated knife.

This is perhaps the trickiest bit to cover but once it’s done you’re not far off finishing the cake.

Adding in the Detail

And there you have it – one flipping cool Olaf cake, which will make you super popular with your children…at least until the next Disney craze comes along!

Get the Kettle On

How to Make a Princess Gingerbread Castle